Art in the Library 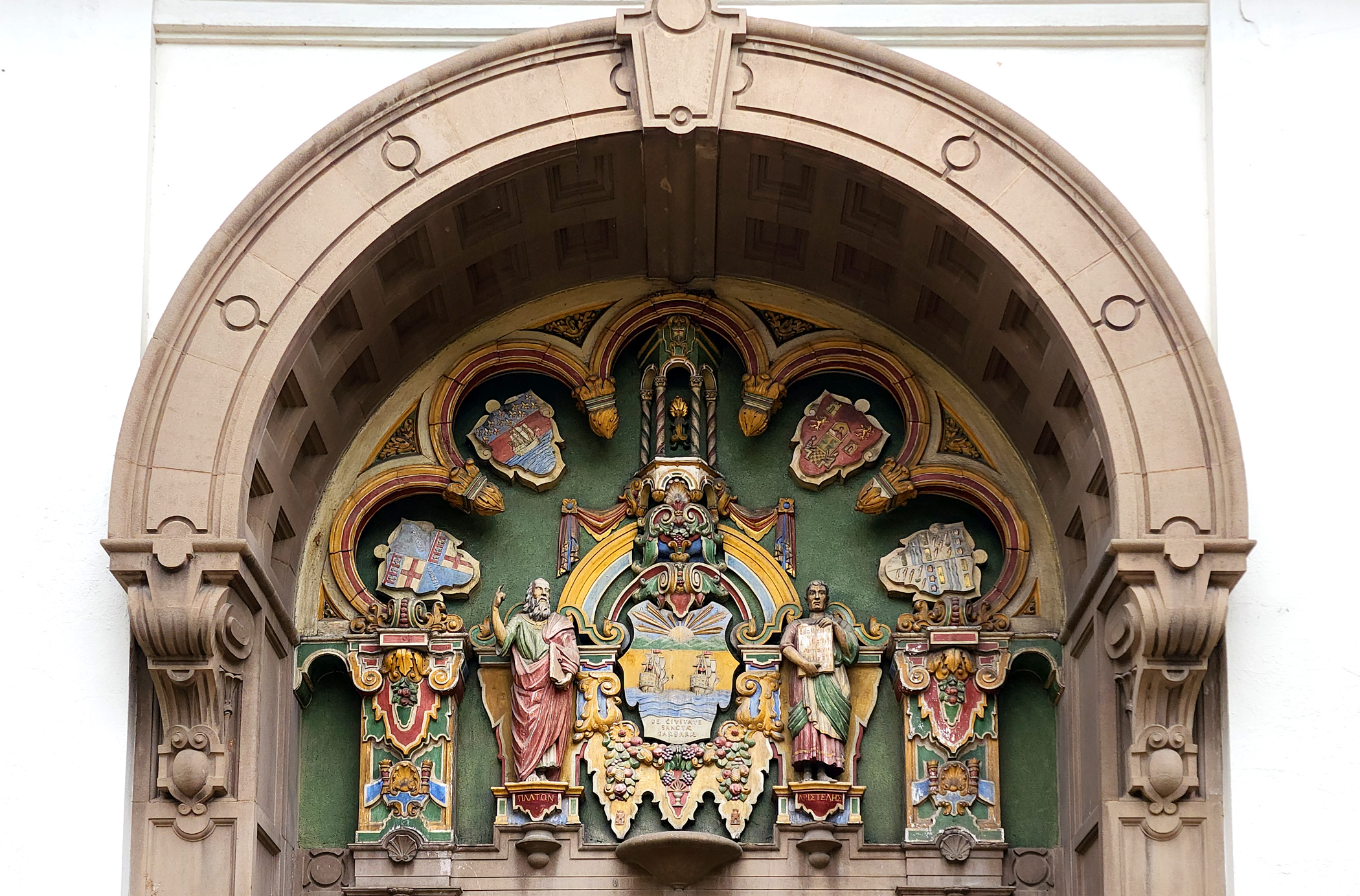 Tympanum over the Historic Main Entrance

Designed by Carleton Winslow and executed by Marshall Laird in 1924, the Tympanum over the historic main entrance was completed seven years after the library opened (1917). Features include the City of Santa Barbara’s Coat of Arms and the figures Plato and Aristotle, surrounded by shields from famous libraries: University of Bologna (Italy), the Bibliothèque Nationale in Paris, the University of Salamanca (Spain), and the Bodleian Library at Oxford University in England.

Designed by Myron Hunt and H.C. Chambers of Los Angeles, the Faulkner Memorial Art Gallery opened on October 15, 1930. Funds to build the art gallery were donated by Mary Faulkner Gould and the land was donated by Clarence A. Black. The architect, Myron Hunt, also designed La Arcada, the Huntington Library, and many other prominent buildings in Southern California. John Gamble designed the Egyptian Sunburst Poppies over the Gallery Entrance.

Before the remodeling of the Santa Barbara Public Library in 1980, the Don Quixote Mural was mounted on the wall of the library’s outdoor courtyard. The mural, completed in 1959 in honor of the Della and Callie Chambers donation (1955), measured 12 feet by an uninterrupted 47 ½ feet. Artists Channing Peake (1910-1989) and Howard Warshaw (1920-1977) created their separate versions of the Don Quixote theme. On the left, Channing Peake depicts Don Quixote and Sancho Panza mounted on Rosinante and the donkey; and Don Quixote attacking a herd of cattle, mistaking them for enemy cavalry. On the right, Howard Warshaw portrays Don Quixote dangling from an upper window and Don Quixote attacking windmills.

Originally ten murals were proposed for the series: The Evolution of the Written Word. The first mural installed was number two in the series, Egyptian Hieroglyphics. The first in the series was to be a depiction of Paleolithic man and cave paintings, followed by the Egyptian hieroglyphics; Mayan culture in Mexico; invention of paper in China; the unifications of the script under Charlemagne; Gutenberg printing the Bible; Caxton printing in England; the first book printed in America and in Mexico; Benjamin Franklin and the first American Magazine; the Saturday Evening Post; and the newspaper. Created in 2014, Lament was first on display at the Museum of Contemporary Art Santa Barbara in the exhibit, “Requiem for a Bibliophile.” In 2016, Lament was featured at the grand opening of UCSB’s newly remodeled Davidson Library. Nancy Gifford donated Lament to the Santa Barbara Public Library in 2019.

From the Artist’s Statement:
“LAMENT is a ‘poem of mourning.’  In the center of this mélange is a restful place which represents the beginning of it all – The Word.  In the middle of a sea of stained papers, like a gyre in the larger sea of knowledge is the idea of THE WORD as a Stain Upon the Silence.” Painted by the Solstice Parade’s co-founder, Michael Gonzales, Summer Solstice Celebration (1981) captures darkness and light, as well as a major transition in Santa Barbara’s Summer Solstice Parade–this was the last year that the parade ended at the Historic Courthouse. After a 20-year sabbatical in Australia, this painting returned to Santa Barbara and was gifted to SBPL in 2008.